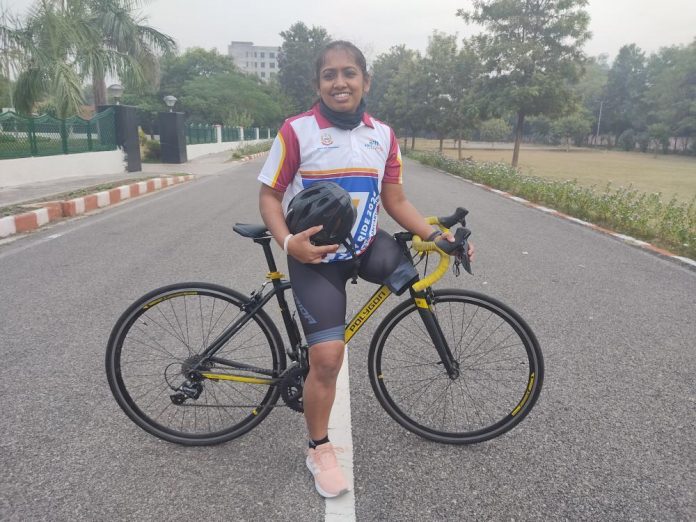 Tanya Alok Daga, a para-cyclist from Biaora city, Madhya Pradesh successfully completed a charity cycle ride from Kashmir to Kanyakumari. Riding with one leg, Tanya covered a distance of 3800 Kms in 43 days on a road bike.

Nine other para-athletes rode with Tanya for the Infinity Ride 2020 organized by Aditya Mehta Foundation to raise funds and support para-athletes. Tanya is the only female para-cyclist in the group to complete such a demanding ride starting from the North to the Southern tip of India.

The seventh season of the Infinity Ride was sponsored by the Border Security Forces of India and was flagged-off by the officials from Jammu, on the 19th of November 2020. Tanya and other fellow cyclist rode an average of 90 to 100 Kms a day, and reached Kanyakumari on the 31st of December 2020.

In the middle of the ride when Tanya had reached Bangalore city, she got the news of her father’s demise. After attending her fathers funeral, Tanya returned to Bangalore and resumed the ride from the point where she had left. She was depressed, but equally determined to complete the challenge. Undeniably, Tanya Daga is a woman with a strong character full of resilience and infinite abilities.

How Tanya Daga entered into Para-Sports:

In 2018, Tanya had been to Dehradun for her MBA studies where she met with a car accident and lost one leg. Post undergoing multiple surgeries and more than six months of treatment, she got connected to Aditya Mehta Foundation through a referral. That was the most painful period for her she said to me in our chat. Explaining further she said, initially, when she took up cycling she bled and felt like surrendering. The counselors at the foundation helped her gradually pick up confidence, and from thereon she began setting up shorter goals.

Tanya worked on her endurance and first accomplished a milestone of 100 km which was her personal best. Later, she was shortlisted by the officials of the Border Security Forces in the top 10 list to participate in the Infinity Ride 2020. Probably, Tanya Daga is the first female para-cyclist in India to finish a ride from Kashmir to Kanyakumari and was proudly rewarded for her effort by the organizers.

Cycling for a Cause:

The Aditya Mehta Foundation is an NGO of Indian origin that supports physically challenged people in the country to pursue sports, and supports them with all the necessary training and equipment. In the last five years, the foundation has supported a more than 150 para-athletes with prosthetic limbs, specialized sports equipment, and sponsorship’s.

“In India Yamaha has FI technology since 2008 with R15 vehicle & now in all BS6 models, which is a proven & successful technology...