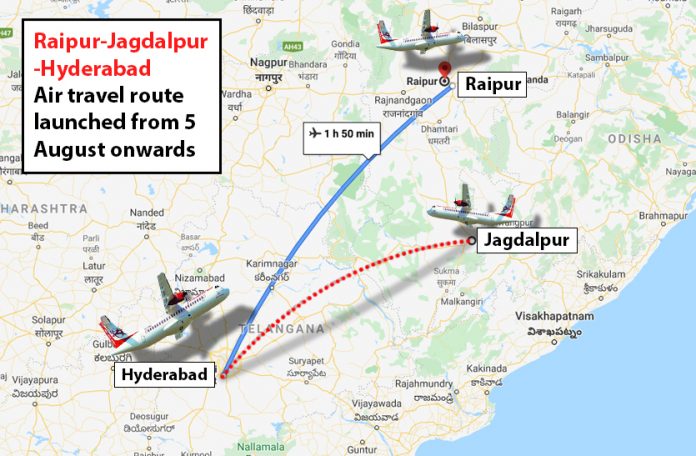 Air connectivity between Raipur and Jagdalpur has now officially begun. The Airport Authority of India (AAI) had issued a license to Alliance Air last month to operate its flight services on the Raipur-Jagdalpur-Hyderabad route from August 5 2020.

On the Hyderabad-Jagdalpur-Raipur route, flight 9I-885 (JGB) will take off from Hyderabad at 9.50 AM and land around 11.15 a.m. in Jagdalpur then fly to Raipur, an official statement said.

Flight 9I-886 will return the same day from Raipur to Hyderabad via Jagdalpur, leaving the capital of Chhattisgarh at 1.40 PM.

Swami Vivekanand Airport Director Rakesh R. Sahay informed the media that the air services were discontinued in November 2018 due to technical reasons. After a technical study, the problems were rectified and the Directorate General of Civil Aviation (DGCA) approved flight resumption from March 29 onwards which was further delayed due to the COVID-19 pandemic and subsequent lockdown.

“We are hoping that the new flight services will help in reviving the economic activity in the state and also boost tourism,” said Sahay.

People from all classes will get an opportunity to fly because the price of 50 percent of the seats is fixed. The rest will see dynamic pricing, the officer added.

The flights will operate every day. Online booking of tickets has also begun.