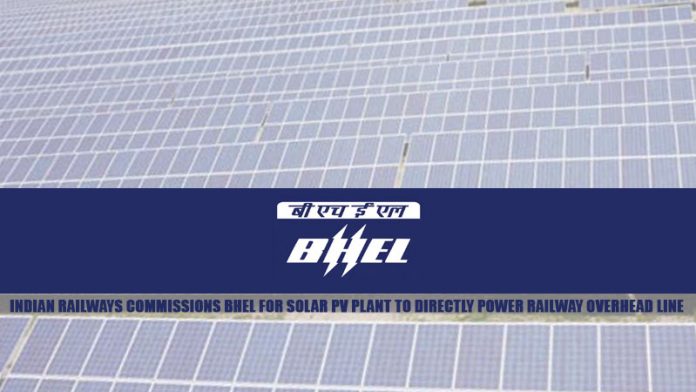 State-run engineering firm BHEL on Thursday said it has successfully commissioned a 1.7 MW solar photovoltaic (PV) plant at Bina in Madhya Pradesh for the Indian Railways. The power generated by the solar power plant will be directly fed to the overhead power lines of the national transporter to power the traction system of the electric locomotives and help to run trains, making it unique and first of its kind in the world.

“The project is a landmark achievement in the history of solar power, as this is the first time that solar power is being directly used for traction applications. Notably, with this, BHEL has achieved direct injection of single-phase 25 kV power to traction substation of Indian Railways,” BHEL official statement stated.

The solar power plant project has been set up at vacant land of Bina Traction Sub Station and will be developed on turnkey basis by BHEL. The plant can produce around 25 lakh units of energy annually and save about INR 1.37 Cr for Indian Railways every year, said Piyush Goyal, Minister of Indian Railways.

This power plant has been set up on experimental basis and is under extensive testing, according to Railway Board Chairman, Vinod Kumar Yadav. The purpose behind setting up this plant was to prove the innovative technology of converting Direct Current to single phase Alternating Current to directly feed the overhead traction power for locomotives. In order to do this, Indian Railways is planning to turn its huge land bank into captive PV power plants with a total capacity of 3 GW and ‘Go Green’ by 2030, without the support of utilities. The project’s tenders have been invited and it will take around two to three years to complete this project.

BHEL’s statement added that the R&D, development and manufacturing was completed entirely in-house at BHEL facilities at Bengaluru, Hyderabad, Jhansi and Bhopal. Their scope of work in the project proposed design, engineering, manufacture, supply, construction, erection, testing, commissioning and O&M based on the inputs provided by Indian Railways. Solar plant equipment such as PV modules, SCADA system and HT switchgear have been supplied by BHEL’s manufacturing units located at Bengaluru and Bhopal, respectively.

The project has been installed and commissioned in just 4.5 months from the date of joint land survey with Indian Railways for the Bina location (excluding time lost due to Covid disturbances) while the concept to design and engineering was carried out in less than 1.5 months, the company said.