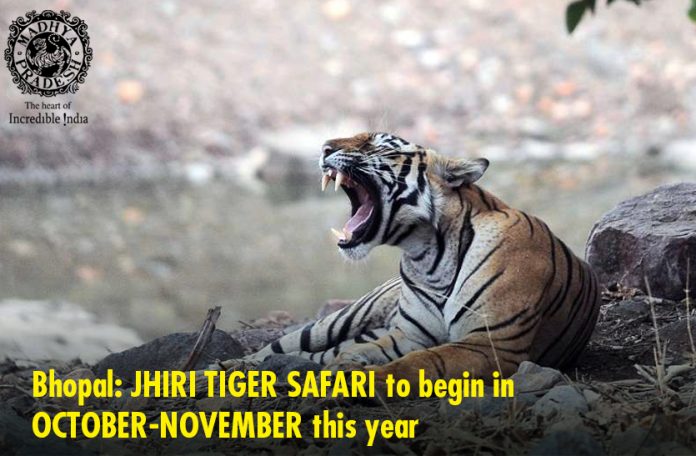 Tourists soon will be able to enjoy Tiger safari near Bhopal. MP Eco-Tourism board has developed a project called ‘Jhiri Safari’ which will start operating from October-November this year. Located in Kolar road of Bhopal, the Jhiri forest will open for tourists after rains and they will be able to enjoy tiger safaris in the area. For this, the Wildlife Headquarters has given permission to the Eco Tourism Board.

Around 35 km long Tiger safari track is being prepared at Jhiri forest, work on which is now 80% complete. Kairi Mahadev is also being linked from here and safety railings are being installed near Mahadev water for the safety of tourists. Grasslands and water saucers have been built to attract wild animals into the forest. Apart from this, guest houses and kitchens are also being prepared for the stay of tourists. At the same time, to keep a track on wild animals and poachers, a watch tower is being developed along with a ticket house.

The forest committee will run and take care of the project on the lines of Burusot, Delawadi, Kathotiya of Ratapani Sanctuary. All the guest houses, kitchens and camps will be run by the forest committees on the instructions of the Board. Officials of the Tourism Board and Wildlife Headquarters say that due to tourism traffic, forest villages/ villagers and forest committees will get employment. “ Wildlife safari will start in Ratapani Sanctuary connected Jhiri forest for which wildlife headquarters has already given permission. The work of making safari tracks is already complete. As soon as the other tiger reserves open after rains, so will the safari here in Jhiri as well”, said SS Rajput, CEO, MP Eco- Tourism Board

Bhopal forest circle is seeing a steady rise in the Tiger population for the past few years. Recent landscape figures state that in Bhopal, along with Ratapani sanctuary there is an average population of 45 and above tigers (between 34-56), which is more than Panna Tiger Reserve and Sanjay Dubri Tiger Reserve’s population.