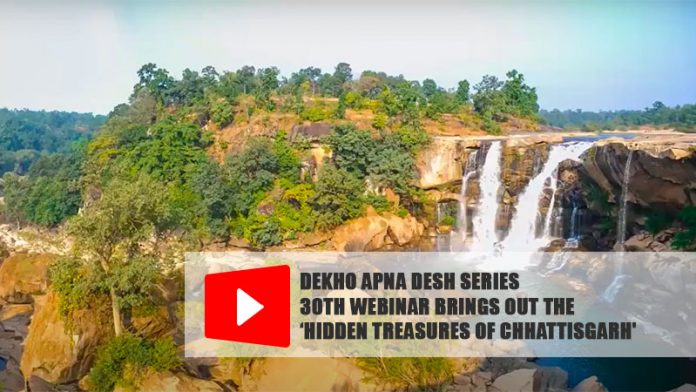 Jaspreet Bhatia set the tone of the session by highlighting some of the key facts of the state and its tourism potential. His speech included facts like how Chhattisgarh came into existence on 1 November 2000 after separating from Madhya Pradesh, hence making it the ninth largest state in India. It borders seven states, has 44 per cent of land covered by forest and shelters 34 per cent of tribal population. With three National parks, 11 Wildlife Sanctuaries and one bio-sphere reserve, it is one of India’s greenest state and with robust connection by air, rail and road network throughout the country.

Some of the best waterfalls of country are in Chhattisgarh including Chitrakote, Amritdhara, Pawai, Machli, etc. It is also blessed with three shaktipeeths – Champaranya, Rajim and Sheorinarayan. Wrought iron, bell metal and terracotta are famous handicrafts of the Central Eastern state.

Jeet Singh Arya took the audience through a virtual tour of Bastar, an unexplored region in south of Chhattisgarh having the most spectacular scenic views, roads and hidden waterfalls. He explained that Bastar region has more than 15 waterfalls as well as Kotumsar caves, which are largest series of caves. Bastar Dussehra is world’s longest festival which is celebrated for 75 days and has a different origin story related to goddess Dhanteswari. Gond’s, Madiya, Muriaya’s are some of the tribes which make Bastar the land of indigenous tribes. Handicrafts history here dates back to Harappan civilization and the technique used is lost wax technique. Third largest lord Ganesha statue in the world which is made of a single sand stone is situated here. Cave paintings with 12000 years of history are also present in Bastar region. Thommen Jose presented the lesser known places of tourist interest and experiences that state offers which are generally ignored by the tourists like Karkabhat: Megalithic burial site where studies conducted have identified 3 types of menhir- Conical, pointed obliquely and bifurcated like a fish tail; Dipadih: Temple complex dating back to the 7th Century where excavated stone pillars have been erected along the path next to the entrance and showcase mythological creatures on them. It is probably the best kept archaeological secret of Chhattisgarh; Ghotul: It is both an ancient tribal system of education as well as the campus with its own system of hierarchs; Sonabai: Famous ornamentation works of Chhattisgarh which has its roots in artistic Sonabai Rajawar ‘s self-made little toys for her son and Tribal games like Cockfighting.

The sessions of webinars are now available on the https://www.youtube.com/channel/UCbzIbBmMvtvH7d6Zo_ZEHDA/videos and also on all social media handles of Ministry of Tourism, Government of India.